POTENTIALLY following Saudi Arabia’s lead, the Pakistan Football Federation (PFF) voted for the United bid comprising United States of America, Canada and Mexico, which eventually won the vote to host the 2026 FIFA World Cup here at the FIFA Congresson Wednesday.
The PFF’s vote for the United bid for the expanded 48-team World Cup came despite committee members of the other competing bid, Morocco, visiting Pakistan earlier this month. PFF president Faisal Saleh Hayat had said Morocco was “Pakistan’s brotherly country” at a news conference then.
But Saudi Arabia announced it would vote for the United bid and speculation swirled that, after the Saudi Arabian Football Federation formed the South West Asian Football Federation (SWAFF) last month, it had control over 11 votes and that’s what transpiredon Thursday. Only SWAFF members that opted for Morocco were Oman and Yemen. 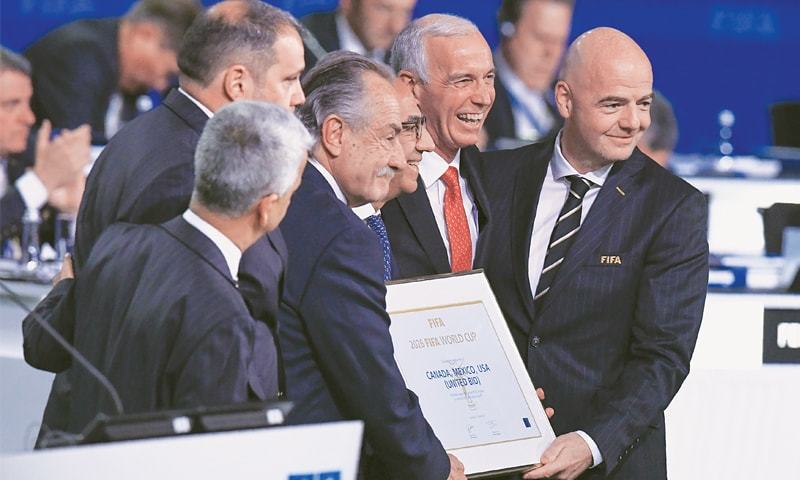 Surprisingly, PFF chief Hayat was not present at the FIFA Congress but leading the three-man PFF delegation was its secretary Col Ahmed Yar Khan Lodhi. The others were Sindh’s Anwar-ul-Haq Qureshi and an official from Wapda.
The PFF delegation passed the mixed zone immediately after the Congress but the president of the All India Football Federation (AIFF), Praful Patel did take questions from Dawn regarding SWAFF members voting as a bloc. “We decided what was best for football,” said Patel, the AFC vice-president for the South Asia region. “We didn’t vote as a bloc.”
Reminded that the voting showed that all South Asian nations and SWAFF members apart from Oman and Yemen had all voted for the United bid, Patel replied: “I will only speak for India but we decided what was best for football. Asked whether the United bid was more appealing for South Asian countries, Patel said “it is a good experiment to see three nations host the World Cup”.
“It’s a 48-team expanded World Cup and I think it would be difficult for a small country to host such a World Cup. I will say we also felt that the Morocco bid wasn’t qualitatively better.” He felt the three-team World Cup could pave the way for a pote­ntial World Cup in the subcontinent. “It’s a good model for us to bid in future with other countries in our region.”
Patel termed SWAFF as a good thing for the future. Saudi Arabia is offering SWAFF members $500,000 per year for football development. “It’s not a body which has got any locus in terms of a zone,” he said. “It’s more like a grouping of nations. It’s a good thing but we’ll see how it goes.”
It was at the first meeting of the SWAFF on the sidelines of the Saudi Cup final in May where PFF official Sardar Naveed Hai­der Khan and the members of the Unit­ed bid crossed paths. Sardar met with United States Soccer Federation (USSF) president Carlos Cordeiro and Mexican Football Federation chief Decio de Maria.
“I asked them what they have to offer,” Sardar had told Dawn after the meeting. “I told them we need infrastructure support and need to build grounds in Balochistan and that will be key for us to give them our vote.”
The United bid got four out five marks from FIFA’s taskforce with Morocco only achieving 2.7. The United bid said it had all the infrastructure in place and could focus on other areas.The United States hosted the World Cup in 1994 while Mexico played host for the 1970 and 1986 editions.
FIFA president Gianni Infantino is said to have pushed for support of the United bid, which had promised a more profitable tournament. Infantino has also been closely working with the Saudi Arabian football officials recently. Saudi Arabia has emerged as a key powerbroker in global football recently and is said to have been behind a consortium which promised FIFA $25billion for control of two tournaments.
On Tuesday night, Saudi Arabian Football Federation hosted an Iftar party at a plush hotel in the Moscow city centre. AFC president Sheikh Salman bin Ebrahim Al Khalifa was the guest of honour there. Sheikh Salman had initially objected to the formation of the SWAFF but the AFC has since cleared the way for the new body’s inception but said it wouldn’t change the five zones the AFC is divided into.
Sheikh Salman has also been said to have been behind the United bid. The only Asian countries to vote for Morocco apart from Oman and Yemen were China, Qatar, Chinese Taipei, Brunei Darrusalam, Kazakhstan, North Korea, Palestine, Tajikistan and Syria.
“It’s life,” Morocco bid ambassador El Hadji Diouf told Dawn when asked if he expected more votes from Asia. “It’s life. You have to move on. But its good to see Africa and its people were all united with Morocco.” Morocco, whose bid was a fifth failed one following 1994, 1998, 2006 and 2010, only managed to get 65 votes to United’s 134.
Earlier, Infantino announced FIFA was in a better financial state than it was when he took over two years ago when the world’s football governing body suffered its worst crisis that saw several of its officials being indicted in the US following a sprawling FBI investigation.
It has also been said that Infantino’s support for the United bid was due to the fact that he wanted to appease the authorities in the US. “FIFA was clinically dead,” Infantino said, addressing the Congress. “Today it is alive and well, and full of joy, full of passion and having a vision for its future.” He closed the Congress with remarks on his own future: that he would run for re-election next year.
And probably to ensure a re-election, FIFA has offered member associations a 20 percent increase in funding in its Forward development programme.
Published in Dawn, June 14th, 2018
The rebirth of our football league [The News][FPDC Exclusive] Interview with Adnan Mohammad
In
News Women's Football