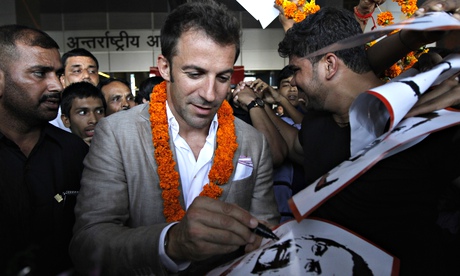 Big names, such as Alessandro Del Piero, have been attracted to the glittering prospect of the Indian Super League. Photograph: Hindustan Times/Hindustan Times via Getty Images

The Indian Super League is big news. Previews of this eight-team, 10-week season full of ageing stars are running all over international and the country’s media. Whatever long-term benefits there may or may not be, football fans everywhere are either excited, curious or at least aware of something going on in Indian football. When was the last time something similar could be said about Pakistan? This south Asian giant is in danger of being forgotten.

On Sunday, fans in India were preparing to see Nicolas Anelka of Mumbai City taking on Luis García of Atlético De Kolkata in front of a sell-out crowd expected to be close to 100,000. Monday has Delhi Dynamos and Alessandro Del Piero meeting FC Pune City, part-owned by Fiorentina and featuring David Trezeguet. At around the same time, fans on the other side of the border can watch Pakistan Railway take on National Bank before the country’s best team, Khan Research Laboratories, the following day face Pakistan Airlines in front of crowds that will likely be in three figures. No European teams, star actors or cricketing gods own these clubs but rather, as their names suggest, state-owned institutions. Sexy it isn’t?

Nor is it super. Stadiums are empty, facilities are poor and money is largely absent. The league run by the Pakistan Football Federation (PFF), itself run largely by bureaucrats and civil servants, is struggling. “In terms of infrastructure, playing fields and stadiums, the league does not meet the criteria for modern football,” the Pakistan national team coach from 2011 to 2013, Zavisa Milosavljevic, told The Guardian.

Fired by the PFF, it is not surprising the Serbian points the finger at high-ranking officials in the organisation who, he says, are more interested in protecting power and putting responsibility on to the shoulders of coaches.

Such criticism is not unusual. “Sports marketing and the corporate elite go well together in India and [are] supported by the Bollywood stars,” says Mohammed Shahnawaz of FootballPakistan.com. “They have cashed in on this compared with Pakistan where sport remains stuck in a time warp where governmental bodies wield most of the control and politicians, military men and bureaucrats govern various sports.”

Shahnawaz believes the potential, if the right structures are in place, is huge, especially as concerns over the security situation are overblown. “Pakistan must move away from government departments and towards either a club-based set-up or franchise model. A lot of work has gone into development of various goal projects funded by Fifa but that needs to be backed up with investment into grassroots football, youth development and a strong national team.”

There is talent. In August, Pakistan played a two-game mini-series with their old rivals in Bengaluru. The Green Shirts were the better team in the first game despite a 1-0 loss and then bounced back to win the second in some comfort thanks to a late goal from Saddam Hussein. It was a controlled performance.

The next month, the Bahraini coach Mohammad Al Shamlan took the Under-23 side to South Korea for the Asian Games for an all-too-rare opportunity for competitive action against teams other than near neighbours. In Incheon, Pakistan performed pretty well. Losing 2-0 to the eventual runners-up North Korea was no disgrace especially as the first goal, just before half-time, was a penalty that resulted in Mansoor Khan’s dismissal. And then came a narrow 1-0 loss to a China side that included players from the Asian club champions Guangzhou Evergrande, coached by the former, albeit caretaker, national boss, Fu Bo.

Sometimes though, the country does not help itself. India may have the ISL but at the moment, it is Afghanistan (which has a slick new tournament of its own to enthuse over, the television reality show-inspired Premier League) with the strongest national team in South Asia. Some of the improvement in the Lions of Khorasan is down to embracing the country’s wide-ranging Afghan diaspora, including players in action in Europe or North America. Pakistan has similar resources but has not always managed a smooth integration into the national team. The former captain Mohammed Essa has criticised the overseas contingent for a lack of passion. The targets of such jibes, such as Zesh Rehman, the British-born Pakistan international and former Fulham and Bradford defender, believe they are sometimes used as scapegoats to hide the failings of the homegrown players.

A more mature attitude is needed and in the meantime, perhaps the best solution is to try and send locals overseas. Earlier this year, the international striker Kaleem Ullah left Khan Research for Kyrgyzstan. It may not sound like much of a step up, but it is. His new team, Dordoi Bishkek have collected eight of the past 10 titles and have won the AFC President’s Cup, the continent’s third-tier cup competition, on two occasions. “While I’m here I get the chance to play against experienced teams which helps me in terms of skill and technique, as does working with professional coaches,” Kaleem says. “By improving my technique I not only develop my level of football but can boost the national team.”

Kaleem is also excited about the ISL. “It is a possible first step in the process of revival of football in India, it will be a great boost as mature international players will pass their skills and experience to domestic talent and that’s something a youth footballer in India has rarely experienced.”

A Pakistani franchise in the competition may not be imminent, given the state of relations between the two powers, but football does have a habit of succeeding where politicians fail and Shahnawaz believes that one day an MLS-style set-up, one that involves and engages neighbours, is a possibility. “If such expansion is considered, it would work well because the popularity of the sport is growing in Pakistan. It would require courage from ISL organisers and somebody with deep pockets in Pakistan to make it a reality.”