As expected Pakistan’s football team once again failed to advance beyond the group stage in the SAFF Cup, which was ultimately won by Afghanistan, who beat six-time champions India 2-0 in the final in Kathmandu.

After losing to arch-rivals India 0-1, Pakistan held Nepal 1-1 before beating Bangladesh 2-1 in the last match. Both India and Pakistan had the same number of points and goal-average after the group stage, but India made it to the semi-finals because they had beaten Pakistan in their opener.

In the 2011 SAFF Cup, too, Pakistan had failed to qualify for the semi-finals after holding all their three group opponents to draws.

This time the Samar Ishaq-led team exited with a single win. Several pre-tournament decisions by the Pakistan Football Federation (PFF) affected the team’s performance in Nepal. Just an hour after Pakistan lost to Afghanistan 3-0 in a friendly in Kabul on August 20, PFF removed not only Serbian coach Zavisa Milosavljevic but also goalkeeping coach Aslam Khan from the Kathmandu-bound party.

Assistant coach Shehzad Anwar, who before this event had acted as Pakistan coach for only a single international against Malaysia in October 2008, was made the head coach.

The newly-hired Bahraini coach Mohamed Shamlan was sent with the team as a consultant. The Bahraini did a fine job while remaining in the background by guiding Shehzad Anwar, who despite being so young showed real guts as a coach.

The confidence which Shehzad showed can be a plus point for Pakistan. If he is groomed with Shamlan he can turn out to be a precious asset.

But PFF’s decision to remove Zavisa at a time when the team was about to leave for Nepal was not praiseworthy.

Zavisa could have performed better had he been given the opportunity. Pakistan’s defeat at the hands of Afghanistan in the friendly was not something necessitating his removal because Pakistan were missing their five key foreign-based players in that match and the Afghans were the region’s best side, which they proved by lifting their maiden SAFF tile.

If the PFF wanted to remove Zavisa he should have been sacked when Pakistan had failed to impress in the Asian Football Confederation (AFC) Challenge Cup Qualifiers in Kyrgyzstan early this year. 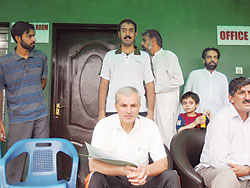 According to sources, when Pakistani team was doing warm-up just before the start of their friendly against Afghanistan in Kabul, a top official of the PFF called the team’s physiotherapist Dr Kamran Mehdi. The official told Kamran that he would like to talk to Zavisa but the Serbian, while feeling it against the rules, refused to talk to the official.

Sources said that Zavisa’s attitude infuriated the PFF top official and he abruptly sacked Zavisa after his side lost to the Afghans.

Zavisa has not yet been released by the PFF. He is working with the Pakistan Under-19 team in Lahore.

The removal of the goalkeeping coach Aslam was even more unexpected. Aslam, who has a great role in preparing Pakistan’s top goalkeepers, including Jaffar Khan, was doing a good job. The team missed him during the SAFF Cup when the Denmark-based gloveman Yousuf Butt made a silly mistake against Nepal. This harmed Pakistan a lot.

Goalkeeping coach is an integral part of a team as other coaching staff does not know much about it. According to sources, there are a few persons in the PFF who don’t like to see Aslam with the team. It was pre-planned that both Zavisa and Aslam should be removed, they said.

Former Fulham defender Zeeshan Rehman was very impressive in the deep in the SAFF Cup.

Skipper Samar Ishaq, whose own goal during the match against India caused Pakistan’s ouster from the tournament eventually, also helped the team a lot with his nice defence work.

The PFF had not given sufficient international exposure to the team which was direly needed for proper preparation.

There is no consistency in the planning of the PFF. Pakistan senior team played only a single international game from December 2011 to November 2012. How can a team improve without enough exposure? There should be at least 15 to 20 international matches in a year.

Now the reins of the team are in the hands of Shamlan, who has been hired by the PFF for a couple of years with the blessings of the Bahrain Football Association (BFA).

Shamlan, a former international defender, is the right choice for the job as he is well aware of Pakistan’s football. He worked with former Pakistan coach Salman Sharida in 2005-2006.

He would develop the team well if given free hand. The PFF should meet all his demands in this regard.

These days he is witnessing Premier League matches and is short-listing players for training. There are chances that he may find good stuff for future. Shamlan wants to impart quality training to Pakistan and it is expected that he will hold national team’s camps in the Gulf region.

The PFF should utilise the services of Shamlan in the best possible manner and should also groom local coaches under him so that a healthy pool of coaches is prepared for future.