Ali Raza scored 2 goals in the game and was given a Holy Quran prize as best player by Mr. Sajjad Hussain, president of Prince FC, as Chief Guest. Secretary D.F.A Sheikhupura Mr. Jameel Awan give one football to loser team.

In the 6th match of the tournament, the hosts Muslim Sports FC (Sheikhupura) won their first match against United FC Kharianwala (Sheikhupura dist.) 3-0 on penalties on 28 Feb 2013.

The younger and newly-formed side United FC Kharianwala got lead on the start of match and played excellent football against senior players of host team as the game finished 1-1 at end of normal time. Ajmal scored for United FC while Usman for Muslim Sports.

The match was then decided on penalty kicks. Muslim Sports’ captain Arif, Ehsan and Khushan score their goal while goalkeeper Muhammad Nadeem  saved all 3 shots of United FC and was declared man of match. Mr. Hamid was the chief Guest of the match and gave a prize of Holy Quran to man of the match Muhammad Nadeem, and give the prize of football to United FC. 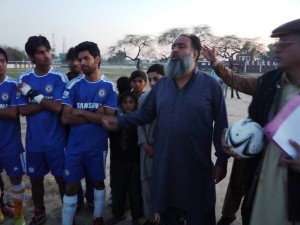 Former Secretary D.F.A Sheikhupura Mr. Muhammad Arshad Awan was the guest. He give the prize of Holy Quran to Mr. Javaid man of match. While senior member of Muslim Sports MR. Muhammad Ishaq gave one football to losing team.