KARACHI: Pak Afghan Clearing Agency (PACA) were crowned champions when they defeated Faisalabad’s University FC 3-0 in penalty shootout in the final of the 9th PFF League 2012 (B Division) held at the Rai Ali Nawaz Stadium in Sahiwal on Friday, 21 December 2012.

After the match ended in a goalless stalemate, PACA, co-owned by former Pakistan captain Mohammad Essa, converted three penalties through Abdul Hadi, Hazrat Maaz and Abdul Nasir while their rivals failed to convert any in the penalty shootout.

“Our team played nicely but was unlucky not to score any goal in the scheduled time,” Mohammad Essa told this correspondent.

“It’s a great achievement that the team won the event on its debut. I am going to Chaman tomorrow and the team will be extended a warm reception on Sunday,” said Essa, who is nursing a knee injury which has also kept him away from the Premier League matches.

“The players will also be given raise in their salaries for extending such a superb performance,” the seasoned playmaker said.

Both the finalists have also qualified for the Premier League.

They will replace the two bottom-placed sides of the Premier League being in operation these days.

In the end a colourful prize distribution ceremony was held during which the secretary of the Pakistan Football Federation (PFF) Col Ahmad Yar Khan Lodhi was the chief guest.

The winners, PACA, were handed over a glittering trophy and a purse of Rs200,000 while the runners-up University FC received Rs150, 000. Both the finalists also shared the fair-play trophy and a cash of Rs50, 000. Similarly, Rs 50,000 each were presented to Sui Southern Gas Company (SSGC) and Sahiwal’s Young Blood for finishing as runners-up in the departmental and club legs respectively. 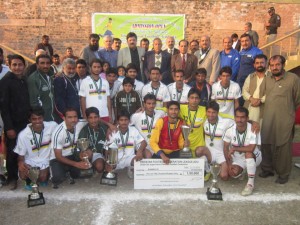 Abdul Hadi of PACA and Rizwan Ali of University FC got richer by Rs15,000 each after emerging as leading scorers in their respective departmental and club legs.

Hazrat Maaz of PACA and Abdul Razzaq of University FC shared Rs20,000 each after being adjudged as the best players of the competitions.