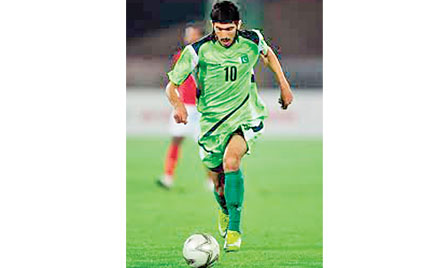 Kaleem, who before this match had made hat-tricks against Muslim FC, Habib Bank and Afghan FC, landed his fourth and third consecutive treble to enable KRL to outgun underdogs Baloch FC with an enviable ease.

Kaleem, who led Pakistan in the Under-22 Asian Cup Qualifiers in Saudi Arabia in June-July, struck in 22nd, 45rd and 57th minutes to take his personal tally to 13.

He was joined on the scoresheet by Saadullah with a strike in the 42nd minute.

The victory inflated KRL points tally to 34 from 14 meetings, three points ahead of the second-placed Army and PAF who have 31 points each.

As the KRL midfielder Mehmood Khan was the architect of all the goal-scoring moves he was rewarded with the best player award.

“I think our boys have gained real form,” KRL manager Ayaz Butt told ‘The News’. “Mehmood Khan is playing a key role and Kaleem, who had missed a few matches in the beginning due to injury, has also started clicking.”

At the Jinnah Stadium in Islamabad, debutants Zarai Taraqiati Bank Limited (ZTBL) notched their third victory of the season when they outshone injury-hit Pakistan International Airlines (PIA) 1-0. Izharullah netted the winner from a very difficult angle in the 12th minute. The result took ZTBL to 14 points from 15 matches.

“We were unlucky today as Izhar scored such a fine goal against us from a narrow angle that our goalkeeper had no chance to save,” PIA coach Shamim Khan said.

PIA trail at 16 points from 15 appearances.

Karachi Port Trust (KPT) did a fine job by holding dangerous Pakistan Air Force (PAF) to a goalless draw at the PAF Complex in Peshawar.

The result guided KPT to 16 points from 15 matches, while hosts PAF joined Army on the second spot as both have 31 points, but Army have one match advantage.

“It was not our day as we missed a few open chances. Our strikers Irfan, Mujahid and Mansoor Khan were not on target,” PAF coach Mohammad Arshad said.

KPT coach Mohammad Asif termed the match an exciting one. “Both sides played really well and it was a fine game altogether,” said Asif.

At the UMT Ground in Lahore, the match between Navy and Wohaib Club ended in a 1-1 draw. After a goalless first half, Nouman put Wohaib Club on the front foot with a fine field effort in the 47th minute.

Navy bounced back smartly, netting an equaliser through Abdul Haq in the 64th minute.

By virtue of the single point, Wohaib Club, fighting to save their seat for the next season, moved to five points from 14 matches.

Navy advanced to 19 points from 16 matches.

Meanwhile, a top official of the Pakistan Football Federation (PFF) said that PAF were given a walkover against PIA the other day after the latter did not turn up for the rescheduled match in Peshawar following the first day postponement due to heavy rain.

by Alam Zeb Safi [The News]

PPFL 2nd leg gets underway from today [The News]