The 2010 Karachi United Youth Football League returned from Eid-ul-Azha break with its 7th game earning a late night kick off between North Nazimabad centre and North Karachi centre at Hassan Masna Alvi Ground in Sector 11-B, North Karachi. North Nazimabad gained three valuable points to lead the league table after snatching a thrilling 1-0 win thanks to a 1st half goal from striker Sameer.

Because of his outstanding performance the entire game between the goal posts in keeping out N. Nazimabad’s attacks, league administrator Riaz Ahmed declared North Karachi’s goalkeeper Muhammad Fahad the man of the match.

The game began with North Nazimabad centre dominating the game from kick off.  N. Nazimabad’s strikers Sameer and Umar were well supplied with good passes from midfielders Noman, Matiullah, and Ubaid but N. Karachi goalie Fahad kept out attack after attack on his goal with some superb saves. However Fahad could not keep his side from faltering. In

26th minute he was helpless as Sameer, who was standing outside the penalty box, lobbed the ball over Fahad’s head into the net when the N. Karachi goalie had come out to punch away a corner kick. 1-0 to North Nazimabad at half time.

Second half, North Karachi came out strongly to get a much needed equaliser but North Nazimabad’s defensive wall of Bilal, Ghaffar, Ahmed and Ubaid held strong while goalkeeper Raadif remained solid in goal as the North Karachi strike force of Saad, Imran, and Ali Raza ran out of ideas as national referee Babar Khan blew the final whistle. The game ended 1-0 with North Nazimabad top on 9 points from 4 games while North Karachi still faltering at 0 from its 3 games. 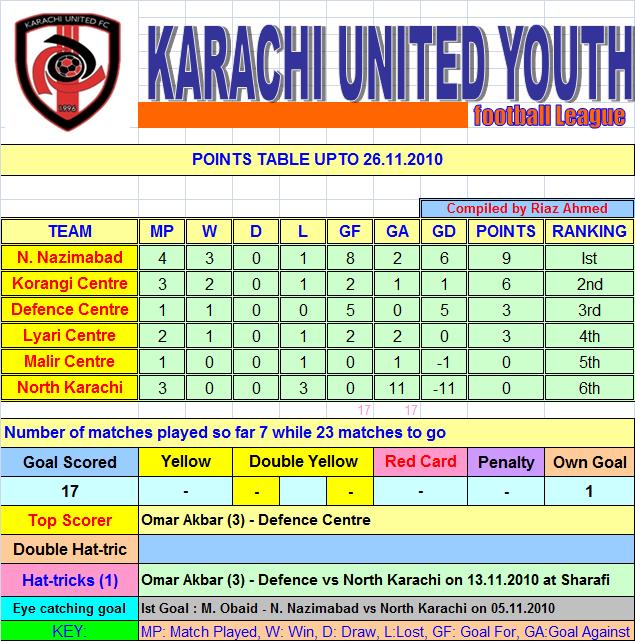 Ashfaq group urged to show flexibility in stance [The News]